A Guide To Indian Cuisine

Indian cuisine is meant to be eaten socially, in groups, until everyone is fully satisfied. You will be served all your courses at once on a plate of food called a thali. A thali is a large tray that is used to serve all the foods at once. Some foods are mild, sweet and some are spicy and hot. Most dinners are served later at night since many Indians eat several smaller meals during the day. The food ranges from very simple vegetarian fare to exotic dishes layered with texture and flavor. Great care is taken in the planning and preparation of meals no matter how simple or complex.

Indian cuisine dates back over 5000 years. Each region has its own traditions, religions and culture that influence its food. Hindus tend to be vegetarian and Muslims tend to have meat dishes, although pork is forbidden. Indian food has been influenced by Mongolian, Persian and Chinese cuisine, among others. The common thread throughout the centuries remains the distinct mixing of spices that invariably give Indian cuisine its flavor and aroma. 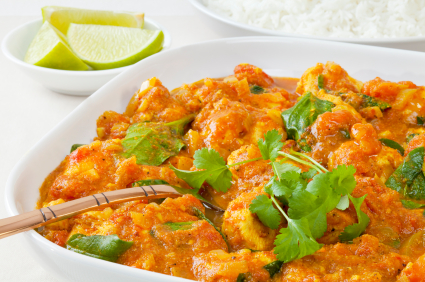 Indian ingredients are as varied as the Indian people and the available foods of each region. Masala means spice blend. Certain foods use certain spice blends. For instance, birlyani masala—cardamom, cinnamon, cloves and fennel—is used for birlyani, an oven-cooked dish of rice and a vegetable, seafood or meat. Chilies, mustard seeds, gram flour, coconut and yogurt are popular ingredients in all types of Indian cuisine. Ghee, a type of clarified butter, is used for cooking, and has a toasty taste. Saffron is used to flavor and color rice dishes. Over 5,000 years you learn to use what you have and be creative with it.

Food choice varies north, south, east and west. Indians from the north eat flat breads like chapati and naan, while Southern Indians prefer to eat rice and coconut. The versatile coconut not only provides milk, it thickens stews, makes a chewy snack and is used in many sweet southern dishes as an ingredient or as a garnish. Western India is more cosmopolitan, but is known for its traditional spicy curries. Mumbai, formerly Bombay, at the heart of the region, is flooded with city dwellers, students and workers. They all have their traditional cuisines, but seafood and curries, hot and spicy sausages and snacks with chai tea are popular traditional fare. East Indian food relies heavily on rice, milk and vegetables, prepared simply with yogurt, seeds and spices steamed and curried. East Indians love their sweets and use milk and other dairy products abundantly in them.

Sweet rice pudding, similar to rice pudding in America, is called kheer. It consists of basmati rice, milk, raisins, sugar, cardamom seed and almonds. Kulfi, is an Indian ice cream made by boiling reduced milk, which is then chilled and then flavored with mango juice, rose water and sweetened with sugar. Gajar Halwa, a carrot dessert, coconut soufflé, mango mousse and Gasgase Payasam are also popular desserts. Eastern India is well known for its sweets.

Chai is a tea commonly consumed upon rising each morning. It is made by adding milk, sugar and black cardamom pods to steeped teabags. Sweet Lassi is a yogurt shake that can also be flavored with mango, a popular fruit, much like a smoothie. Ginger and lemon tea are also popular and can be used for medicinal purposes, such as indigestion. Carrot Gheer is served by adding carrot to cold milk. Alcohol is rarely consumed as it is forbidden in many Indian cultures. Tea is more popular than coffee, coconut milk, mango, guava and sugarcane juices are popular and sold in roadside stands and kiosks. If you want something salty, Jal Jeera, water and cumin, might be to your liking.

Indian cuisine makes best use of what is available, which is why each region has its own popular dishes. Dal, a lentil dish, is popular in the North. Meen Moli, a white fish curry, is loved in the South. Western Indians can’t get along without Vindaloo, a pork dish. East Indians love their sweets—one of the most popular being Chhenagaja—chhena, flour and sugar syrup. Halwa, a popular breakfast dish, consists of wheat, butter, sugar and almonds or pistachios. Indian snacks include samosas, a spicy turnover stuffed with potatoes and peas and a puffy rice, yogurt, tamarind and potato blend snack called bhel puri. Kabobs, meatballs, tandoori (clay-baked) chicken, rasam soup, and rice cakes, called idli, are popular dishes.