How Much Money Can You Earn as a Chef?

Upon graduation from Culinary Arts school, don’t be surprised to see a wide range of salaries across available professional culinary jobs offerings.  Contemporary chefs work in a wide array of kitchens job, in environments that require varying levels of skill.

Compensation is based on a host of factors, some within your control and others that are not.  To be sure, a comprehensive culinary arts education increases your mobility potential in the kitchen, and instills a skill-set that is preparatory for entry-level employment in a wide range of kitchen roles.

Your first job in a kitchen will not be as the Executive Chef, so measure your expectations early on, as you carve out your culinary niche.  The hospitality industry promotes from within, so there is always a strong incentive to put your most professional foot forward, no matter what kitchen job you are working.

Business and management training are educational segments that provide for higher-level management roles in the kitchen, and beyond.  If your aspirations include Executive Chef and other upper-level hospitality positions, it is imperative that you include budgeting, supervising, food-cost analysis, and purchasing in the scope of your schooling.

The COVID-19 virus spread and associated lockdowns destroyed many small businesses with restaurants being one of the hardest hit categories of the economy. The mainstream news media promoted fear related to the virus on a daily basis. Even when lockdowns ended in many areas people were still afraid to dine out.

Young workers who often work in the hospitality industry were one of the hardest hit demographics. In the wake of lockdowns around 5.9 million people working in the restaurant industry temporarily lost their jobs, accounting for around 25% of all job losses across the United States associated with the COVID-19 crisis. Before the crisis 12.3 million people were employed in the industry. The following wage prediction data from the BLS was before the lockdowns.

Extended (and elevated) unemployment benefits created additional stresses for uncertain restaurant owners as low wages combined with fear of virus exposure made it hard for some restaurants to find staff in spite of the heavy layoffs.

The pandemic may permanently shift many consumer behaviors online with meal delivery services more frequently replacing dining out. The following BLS statistics were published before the COVID-19 crisis. Almost nobody predicted such a viral pandemic and few know what the world will look like 5 or 10 years out, so one can take the following stats with a pinch of salt.

The BLS Occupational Outlook Handbook predicts 11% employment growth for chefs and head cooks in the next decade.

Nearly 18 times as many people are employed as cooks as head cooks & employment is also growing at a similar rate.

The BLS Occupational Outlook Handbook predicts 6% employment growth for bakers in the next decade.

Food and beverage serving workers are anticipated to see even faster employment growth over the next decade.

The BLS Occupational Outlook Handbook predicts 8% employment growth for bartenders in the next decade.

The BLS Occupational Outlook Handbook predicts 8% employment growth for food preparation workers in the next decade.

The BLS Occupational Outlook Handbook predicts 6% employment growth for waiters & waitresses in the next decade. 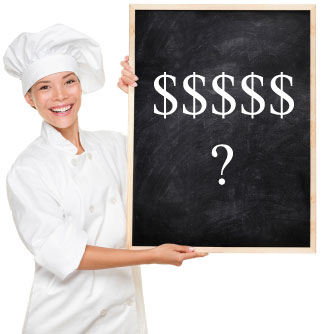 The Executive Chef position stands as the top placeholder within the hierarchical French ‘brigade’ system of kitchen staff organization.  Though the job is the pinnacle of kitchen employment, the pay scale varies widely across the profession. For example, the Executive Chef for the White House earns a surprisingly modest salary--under $100,000--given the importance and notoriety of the position.

Top dollar Executive Chef jobs are limited, but leading positions are available at fine-dining restaurants, and in domestic and international resorts and hotels. Common salaries for  head chefs are between $50,000 and $100,000, with the highest salaries awarded by the largest and most reputable properties.

Entrepreneurialism is a worthy pursuit for chef school graduates, and can lead to unlimited income potential.  The food revolution that has occurred in the early twenty-first century points to a celebrity food culture, bringing TV chefs into the mainstream.  The Food Network has launched noted careers like Bobby Flay’s and Rachel Ray’s.  Through endorsements, cross marketing, cookbooks, and other brand-specific endeavors, these celebrity chefs have upped the income ante for culinary hopefuls.

The restaurant business is highly competitive, and stands as one of the most volatile start-up business sectors, but there are success stories in every major city.  The percentage of cooking professionals who become wealthy celebrity chefs, of iconic household-name status is small, but as foodie love continues to propel the industry, chef millionaires are increasing in numbers.

The real workhorses of the kitchen might be line cooks, chef’s assistants, and other kitchen role-players.  Entry level work is usually not salaried, with earnings in the $8-$15 per hour range commonly found. Pastry Chefs and Sous Chefs stand between Executives and line-cooks in the hierarchy, and on the pay scale, in most kitchens. Salaries at this level are determined in large part, by specific responsibilities within the kitchen, and regional economic factors.

Determine How Much You Earn

Salaries, in most cases, are not arbitrarily derived.  A host of factors influence your ability to earn in a kitchen, including:

As a Culinary Arts graduate, don’t be afraid to think outside the box, when seeking employment.  The hospitality and food service industries serve a wide variety of gastronomic functions.  Modern chefs and cooks work at:

In general, some of the most highly coveted Executive Chef jobs are found at: