One of the most widespread American culinary arts educational programs is available at the International Culinary School at the Art Institutes.  You will find these programs offered in 30 locations across the U.S., making AI one of North America’s largest culinary educators. Accessibility to students, and standardized curriculums synch the school to the needs of the industry.

The Art Institutes had integrated culinary program previously, but in late 2007 a dynamic partnership between AI and The Food Network led to a complete re-invention of the AI program, giving birth to the International Culinary School. The school’s curriculum was redefined, placing a strong emphasis on international cuisine, menu development, and modern gastronomic innovation.

The school’s programs emphasize progressive trends and practices, but have strong roots in applying fundamental cooking techniques to a broad range of regional international cuisine. The skill-sets taught at AI are designed to prepare students for a wide variety of culinary vocations, including front of the house roles. Instructors impart fundamental skills first, then broaden the scope of learning to encompass a diverse sampling of international cuisine and techniques.

Every Art Institutes location has a Career Services department, which is dedicated to helping students secure industry employment after graduation. Support services are essential components of successful culinary arts schools, and should be within your matrix as you assess potential institutions.

Each year the Art Institutes runs the Best Teen Chef competition with scholarship prizes for the winners.

The Founding of the International Culinary School at The Art Institutes

The curriculum for the International Culinary School program is based upon classical French cooking techniques, and is inclusive of Asian and Latin culinary traditions.  The school’s emphasis on progressive trends and practices introduces students to a wide cross-section of international cuisine. Hands-on experience is stressed, whether in school-run restaurants or through internships in local restaurants.

Chef Michael Nenes, assistant VP Culinary Arts. Prior to joining the Art Institutes, Nenes owned and operated successful restaurants in Houston, TX, Fairbanks, AK, and Vail, CO. He was the Executive Chef for ARAMARK Corporation, and worked as a consultant to many organizations, including Star Fleet Cruise Ships, The Rice Council of America, Campbell’s Soup Company, and Moet & Chandon Champagne. He specializes in American regional cuisine and wild game cuisine.

Master Chef Bill Sy, Academic Advisor and Community Outreach Liason, Culinary Academic Director for The Art Institute of Tucson. He’s been named Culinarian of the Year by the Chef’s Association of Greater Phoenix in 1997, and won the American Culinary Federation’s Western Region Hermann G Rusch Chef’s Achievement Award. Sy was formerly owner of Anna Kao’s Restaurant in Pittsburgh, President of China Gate Restaurants in Phoenix, and Production Manager for the Fairmont Hotel in San Francisco. He specializes in Asian cuisine.

Chef Joe Bonaparte, Directory of Curriculum and Quality Assurance for The Art Institutes, and founder of the Culinary Arts program at The Art Institute of Charlotte. Bonaparte was the only American chef invited to participate in the International Cooking Competition in Bologna, Italy in 2003. He has also participated in the International Slow-Food Conference in Italy. His area of expertise is Italian, charcuterie, farm to table, French, and Thai.
Notable Art Institutes Culinary Alumni 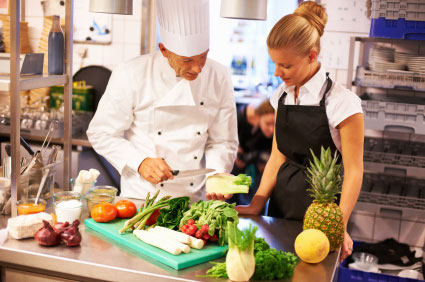 Chef Sameh Wadi, owner and chef of Saffron Restaurant and Bar in Minneapolis, voted best Middle Eastern restaurant by City Pages - The Best of the Twin Cities 2009. Winner of the Duchamp Award for best interpretation at the CuisineArt 2009 competition. Wadi competed on Iron Chef America. Wadi is a 2009 James Beard Foundation nominee, and has been featured in numerous publications, including Conde Nast Traveler, Minnesota Monthly, Minneapolis St. Paul Magazine, and METRO Magazine.

Chef Ty Pauling, banquets manager at Hyatt Hotel in Canberra, Australia, which often caters directly to members of Parliament and government agencies, as well as to the Prime Minister. Former operations manager at The Three Tomatoes Catering, and former house services manager at Parliament House.

Chef Akira Back, executive chef at Bellagio’s Yellowtail Sushi Restaurant and Bar in Las Vegas. Back has been featured on Starchefs.com and selected as a Rising Star by Restaurant Hospitality Magazine, and has cooked at the James Beard House, and participated in Aspen Food & Wine. His specialty is Japanese cuisine.

Chef Malcolm Livingston II, Pastry Commis at Le Cirque in New York City. When hired, he was the youngest of the 16 pastry chefs at Le Cirque.

Here are The Art Institutes campus locations organized by state:

Affiliation with the Food Network gives AI a competitive advantage over some smaller schools.  The caliber of curriculum, degree variations, faculty and guest chefs, and advertising and marketing of programs, are all elevated by the partnership.  For example, Food Network’s promotion of AI’s Best Teen Chef Competition, aimed at college-bound high school seniors interested in pursuing cooking as a career.

Programs of study vary from school to school, but you’ll find the following degree and professional programs offered at AI campuses. These programs award Diplomas, Certificates, and Associate’s or Bachelor’s degrees, depending on the complexity and duration of the coursework involved.

Courses teach culinary skills combined with a focus on baking and pastry. Students are also introduced to the fundamental concepts, skills and technique for making chocolates and other confections.

The International Culinary Schools excel at putting students into hands-on cooking situations. Most, if not all, campuses have their own student-run restaurants, which are open to the public. These restaurants and bistros offer full menus of sophisticated gourmet fare that attract crowds from the local foodie sect. Hands-on professional kitchen experience is an important resume entry at job-seeking time.

Your ultimate goal following culinary school is to land a job in a professional kitchen.  Modern chefs work in restaurants, bistros, hotel kitchens, resorts, spas, convention centers, and even corporate kitchen. Before you start your culinary education, consider where you’d like to land upon graduation. If you’re passionate about cooking and focused on your educational goals, The International Culinary School at the Art Institutes has the programs in place to propel your career in the right direction.

Find A Culinary School in CT With Open Eligibility Today!