German cuisine awakens taste buds to filling dishes featuring spices and other ingredients from around the world. A typical meal may include hearty meat portions drenched in rich, creamy sauces along with buttery rolls, baked squash and a full glass of beer. Some German foods have ample amounts of garlic and onions baked or fried into the dish. The menu includes a wide range of fatty food options for breakfast, lunch and dinner along with classic desserts. These cuisines also feature meals originating from other countries such as France, but throughout history, the Germans have always customized dishes with their own cultural influence.

Pork is one of the main ingredients found in traditional (German recipes). Both Rostbratwurst and Bratwurst sausages are made with a combination of chopped beef and pork. The sausages are grilled and then served with horseradish sauce or mustard. The Germans also like to feast on meat dishes with plentiful amounts of lamb, duck, fish, beef, venison and chicken. Many meals include different types of meat mixed together. 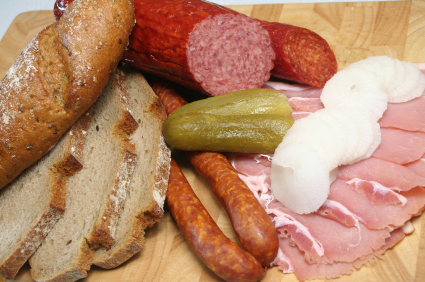 Some common German meat recipes are Goulasch, Eisbein Mit Sauerkraut and Leipziger Allerlei. Leipziger Allerlei is a thick soup made with chunks of beef and vegetables. Goulasch is another type of stew, but this dish is made with fried pork, beef, onions and other vegetables. Eisbein Mit Sauerkraut is prepared by cooking the fat of the pork in sauerkraut. Eierkuchen is a well-known breakfast food that looks similar to crepes because they have a thin, pancake-like appearance, but the German crepe version is larger in diameter. These types of crepes are served with jam and sprinkled with sugar, cheese or topped with meat.

Starchy foods such as thick noodles, dumplings and rolls are served as side dishes. Hollandaise dipping sauce along with grilled, baked or fried carrots, potatoes, spinach, turnips, broccoli and cabbage complement meat dishes. The breakfast side dish menu includes filling choices such as potato pancakes, spiced sausages and rolls. Many breakfast foods like eggs are also served as sides for lunch or dinner.

Germans use condiments or custom sauces made with horseradish, hollandaise and mustard. Herbs and spices such as parsley, cayenne pepper, salt, cinnamon, white pepper and marjoram create distinct flavors. The variety of spices or condiments used depends on specific recipes and the type of meat. Meat recipes often call for spicy or thick sauces, while some breakfast and dessert options feature sweet spices.

Germans consume sugar-laden cookies, cakes and other desserts after a robust meal. Krapfen is a small, round jelly donut, sprinkled with sugar. Other versions of this donut have generous portions of cream or chocolate inside. Stollen is another starchy dessert made with yeast bread and dried fruit. The exterior of the cake is sprinkled with powdered sugar. Dominosteine and Elisen Lebkuchen are two favored chocolate treats in Germany. Dominosteine is a spiced, chocolate cube that has marzipan and jelly filling inside. Elisen Lebkuchen are gingerbread cookies, dipped in a dark or milk chocolate glaze.

Germany has more than 1,200 breweries within the country, making beer and wine a common beverage to go along with meals. Germans take pride in their beer and it shows because they prepare beer with high quality hops and other ingredients such as spices and Belgian fruit. Choose from a wide range of light, medium and dark beers such as Pilsner, Rauchbier and Bock. Pilsner has a mellow taste and light color because it’s made using lightly toasted malts. Rauchbier has a smoky flavor that sets it apart from other beers. Bock is a dark, heavy beer with a strong taste and a hint of malty sweetness.

Both red and white wine are favored beverages in Germany. Muskattrollinger is a red wine, cultivated with very ripe, bright red grapes. This wine has a rich flavor and slight nutmeg aroma. Some other red wines on the menu include Lemberger and Samtrot. Lemberger features a rich red and brownish glow and strong flavor. Samtrot wine has a dark burgundy appearance and rich, full-bodied flavor.

White wine selections such as Kerner and Scheurbe go well with traditional German dishes. Kerner features a soft, golden yellow color and lightly sweet taste. Scheurebe has a strong aroma and rich taste because it’s made with extremely ripe grapes. Germans enjoy drinking plain coffee or coffee made with cherry brandy and whipping cream with breakfast or dessert.

Regions throughout Germany specialize in certain meals. Northern Germany takes pride in recipes such as Schwenkerbraten and Labskaus. Schwenkerbraten features grilled pork cutlets, prepared with garlic, olive oil, paprika, pepper and spicy mustard and then grilled over an open fire. Labskaus is made with rolled pickled fish and corned beef, served with fried eggs on the side. The meat is then cured with butter, onions, broth, beet juice and milk.

Common dishes found in Southern Germany include Flaedlesuppe and Maultaschen. Flaedlesuppe is a pancake soup with strips of pancakes, hot broth, spices, herbs and vegetables such as leeks and celery. Maultaschem is a (German ravioli dish), topped with spinach and bacon. It’s prepared with egg noodles, potato dough and filling that includes garlic, meat and eggs. Various casserole dishes are found throughout Eastern Germany such as Wurzfleisch. This casserole includes a combination of beef, chicken, pork, broth, celery and chopped carrots.