We are proud to offer one of the best collections of free St. Patrick's Day clip art on the web. Simply browse through the below clipart and right click on the one you want. We offer pictures of leprachauns, four-leaf clovers, gold, green beer and more graphics!

No need to worry about downloading & uploading these pictures – we host them for free :)

Once you right click on an image it will automatically pop up a box with the embed code for that image, and then you can quickly embed the image into your WordPress blog, website, or forum. We offer both standard HTML embed code as well as bb/forum code, and you can use this code on virtually any type of website – Facebook, MySpace, Pinterest, Twitter, Google+, WordPress, Blogger, Tumblr, Xanga, hi5, Orkut, Piczo & Friendster. Teachers and students can also use these for school.

This is a four leaf clover. It is colored with a shade of light green.

This is an image of a cartoon three leaf clover smoking a pipe. The clover has big eyes, black eyebrows, and a beard.

Depicted is an animated mug of beer with side-glancing eyes and a frothy head of foam. The mug is brown and gold and it stands in front of an olive green background.

This is an image of a blue stein of beer with a frothy head in front of two brown barrels of beer. A dark green design fills the background and a sprig of hops sits between the barrels and the stein.

This picture depicts two golden mugs of beer with frothy heads next to an old-fashioned beer keg and tap. A dark green design fills the background.

Two tall mugs filled with amber-colored beer topped with white foam stand in front of a dark green design that fills the background. A sprig of fresh hops sits in the foreground.

A man holds a brown mug of beer topped with an overflowing white head. The man wears an outfit that is colored a bright green color. 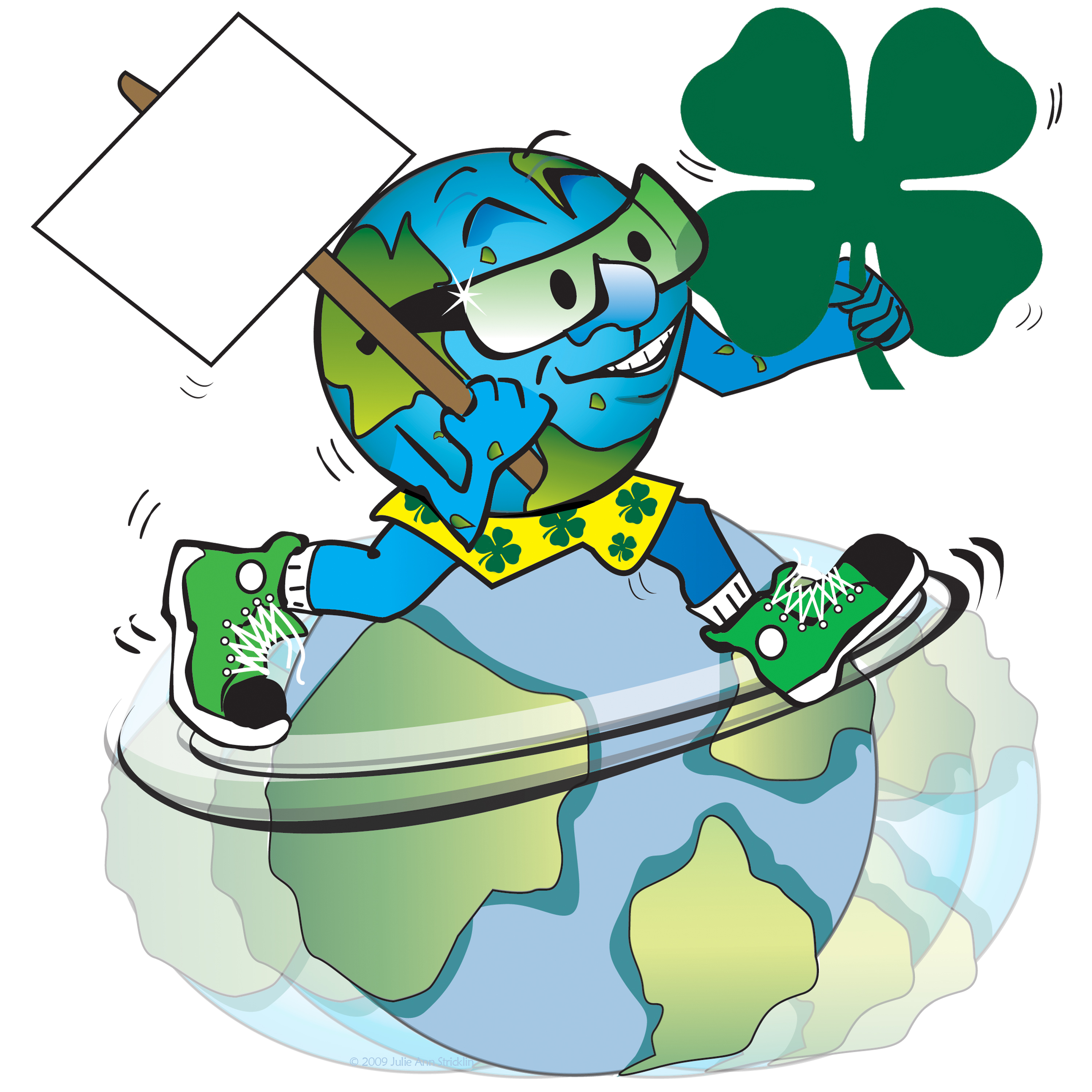 This is a stack of six coins. They are gold.

This is an image of a green mug of beer. It is topped with a foamy head colored green.

This image depicts a woman holding a tray of glasses filled with amber-colored beer. She wears a green low-cut top and a wide brimmed hat with a buckle on it.

This is a sprig of green-colored hops. It is in front of a light-green leaf pattern.

This is an image of a wide-brimmed green leprechaun hat with a buckle. There is a shamrock tucked into the black band of the hat.

This is an image of a pair of brown-colored leprechaun shoes next two a green leprechaun hat filled with gold. The shoes and the hat are on a light-brown surface.

This is a smiling leprechaun holding a cane. He wears a green top hat and a green outfit with a bow tie.

This is an image of a brown pot overflowing with gold. There are also two green shamrocks in the picture.

This is a shiny brown pot. It is overflowing with gold.

Rainbow With a Pot of Gold

This is an image of a rainbow coming out of a pot of gold. The pot is colored silver.

In this picture, a rainbow emerges from behind a white cloud in a light blue sky. The rainbow extends beyond the green hills.

This is an image of a house in the countryside. In the background behind a green hill, a rainbow extends across the purple sky.

This is a picture of a tall glass filled with amber-colored beer topped by a frothy white head. The glass has a shamrock design etched into it.

A golden mug of beer overflowing with a frothy white head sits on top of a brown barrel. The background is a field of green.

This is a template with a St. Patrick’s Day theme. It features two bordered areas for pictures, a tan-colored background, shamrocks, a leprechaun hat, and a mug of beer.

This is an image of a green leprechaun hat, a beer barrel, and a beer stein overflowing with foam. The background is silver and white.

This picture shows two glasses with pink hearts on them next to a wine bottle wrapped with a blue bow. A dark green design fills the background.

Did we miss something? Have a request? Contact us and we will try our best to help out. Thanks for checking out our website! Hope you find using this clipart as fun as we have! :)