Wolfgang Puck’s appetite for the culinary arts was fed in the early days, cooking at his mother’s side in his home country of Austria.  Mom was a chef herself, so once she recognized that Wolfgang’s passion for food was genuine, she encouraged him to begin his formal chef’s training at the tender age of 14 years.

His early work in France exposed him to the culinary tradition in restaurants like Maxims, in Paris and the Michelin 3-star eatery, L’oustau de Baumaniere in Provence.  After a chef stint in prestigious Monaco, Puck was advised to test the U.S. market with his now well-honed culinary point of view.  As a 24 year-old chef, whose star was clearly rising, he moved to the United States in 1973.

Chef Puck landed in Indianapolis, where he worked for a couple years as executive chef at La Tour restaurant.  The pivotal move that defines his career - as most American’s know it, occurred in 1975, when he took his standout talent to Los Angeles.  First as chef, then partner at Ma Maison in Hollywood, Puck exploited his natural charisma alongside the superlative food he offered there. 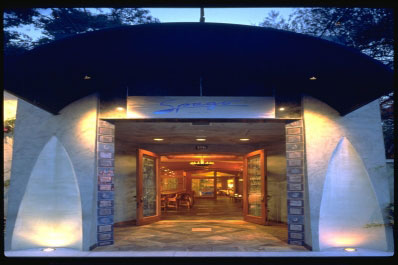 continued as his bread and butter when he opened his flagship restaurant, Spago, in 1982.  The fine dining restaurant remains a highly regarded destination for the rich and famous.  Spago Beverly Hills still hosts some of the hottest annual invite-only post-Oscar parties, and other exclusive events.

For chefs on the rise, working under Puck at Spago is a coveted resume entry that has led to noteworthy careers and to the spread of Chef Puck’s infectious culinary point of view.  His brand is far-reaching and diversified, with a longevity that is enjoyed by only a handful of his contemporaries.

Puck’s company motto: “Eat, Love, Live ” could be the mantra for a generation of chefs and 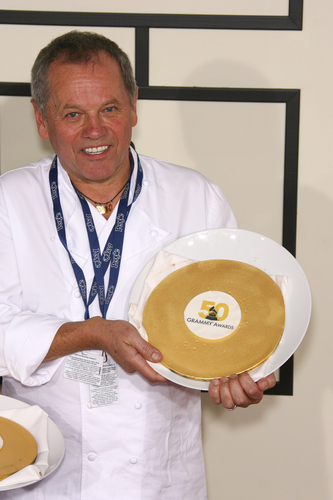 foodies. He is a pioneer in the celebrity chef realm – one of the originals.  With nearly two dozen restaurants, and countless Wolgang Puck Express locations, his brand management employs three distinct culinary corporations to stay on top of daily operations:

A crew of top restaurant managers, financial gurus, and accomplished chefs act as partners to administer Puck’s enterprises, which are now international in scope and include franchise businesses. Chef Puck’s brand extends well beyond food service, to include trademarked WP retail products like:

For culinary students, Wolfgang Puck’s rise to fame is an excellent case study in determination and perseverance.  His ability to exploit the intangibles like charisma, vitality, and chef branding illustrates the segment of a chef’s education that occurs outside the classroom.

By working his way into the hearts of consumers (while his food was getting into their stomachs) he endeared himself to a wide cross section of people who seem to have an insatiable appetite for his quirky persona.  A talent born in his Austrian childhood kitchen, was honed through on-the-job training at some of the world’s finest restaurants, then refined into a unique culinary outlook that pairs perfectly with his impish appeal.  Brilliance?  Serendipity? Likely a combination of both, but for culinary students: an unquestionable success story to be emulated.

Catering to the Hollywood elite has probably facilitated Puck’s access to media fame, but he is ultimately responsible for a celebrity profile that includes appearances on mainstream TV shows like Frasier, Las Vegas, Tales from the Crypt, and American Idol.

Puck’s contemporaries include TV chefs like Child and Pepin, so he is not a new-school Food Network product.  He has appeared on the network though, on Iron Chef Masters and Cooking Class with Wolgang Puck. (www.foodnetwork.com)  He is/was also a spokesperson for the state of California, appearing in promotional commercials alongside Arnold Schwarzenegger.

Puck’s cuisine embraces a diverse range of influences.  Some dishes are very sophisticated and elegant, while others are simple and rustic. His most famous restaurant, Spago, still embodies clean California-inspired seasonal cuisine. (www.wolfgangpuck.com/restaurants/fine-dining/3635)

Other ventures, like Wolfgang Puck Bistro restaurants, straddle the line between full-service and fast casual. His signature rustic pizzas and classic sandwiches – interpreted with Chef Puck’s eye toward quality and freshness, cater to a crowd of daily diners who appreciate meals that go beyond the formulaic fast-casual box stores that dominate many markets. (www.wolfgangpuck.com/bistro/)

The proof is in the pudding for chefs whose brand is embraced and sustained by hungry diners, but the accolades don’t stop there for Wolfgang Puck.  His flagship eatery, Spago Beverly Hills, has been recognized by the James Beard Foundation for Outstanding Service (2005), and as Restaurant of the Year in 1993.

As a nod to his celebrity status, Puck also earned a Daytime Emmy for his show Wolfgang Puck.