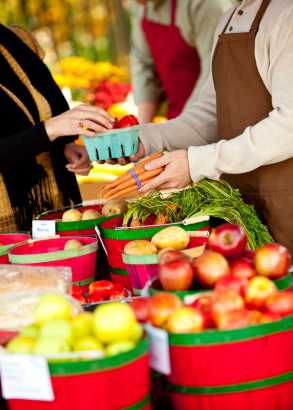 The process of food production and how food reaches consumers is known as a food system. Local food systems are networks of producers, consumers, and distributors in a particular location. These food systems represent an alternative to buying food from global corporations that have to produce food and ship it all over the world. This type of food system is gaining in popularity for several reasons. Buying food from this type of food system stimulates the local economy. It also eases health concerns about buying foods that have been produced in other parts of the world and transported to the United States. Local food systems have several benefits, but there are also some concerns about this model of producing and distributing food.

Elements and Parameters of a Local Food System

Local food typically refers to food produced and distributed in a specific geographic area. In local food systems, food is produced close to where it is purchased and consumed. Locavores are consumers that try to eat food that has only been produced within 100 miles of where they live. However, this 100-mile radius is not necessarily the sole definition of “local” in this type of food system. Some consumers refer to local food as food produced within a specific region. Whether someone lives in a rural area or densely populated urban area is also a consideration. Rural consumers may have to travel greater distances to purchase food, increasing the potential size of their local food networks. Within a local food system, there are two major types of markets. Direct-to-consumer markets are where farmers sell their foods directly to consumers. The direct-to-retail model is when farmers sell directly to hospitals, government agencies, retail stores, schools, and other institutions. One of the most popular direct-to-consumer sales methods is the farmers’ market, which is when local farmers gather in one location to sell their products.

Local food systems have several benefits for consumers and food producers. There is growing concern about the health risks of eating mass-produced or genetically-modified foods. Buying fresh produce and local meat can eliminate or greatly reduce these risks in a local food system. Food produced far away from where it is sold can lose its flavor or even start to go bad during transport. Buying food from local food systems reduces food spoilage and may result in eating better-tasting foods. In some cases, food producers can price their foods lower than those produced by global conglomerates. This is because local food systems reduce the need to market food products on a global scale. These lower prices make it easier for consumers to afford fresh food.

Eating local food can even help consumers improve their health. Because the local food movement is relatively new, there have not been a lot of studies on the health effects of eating this way. However, some researchers suggest that consumers who try to eat local foods will eat a lot fewer processed foods, reducing their intake of fat, sugar, and preservatives. Locavores are also likely to eat more fruits and vegetables, increasing their intake of essential vitamins and minerals. Increased food security is another benefit of local food systems. Food security refers to availability of and access to food. When local producers sell their products directly to consumers, consumers enjoy greater access. Local food systems also increase the availability of high-quality foods.

How Local Food Affects the Economy

Many people do not realize that buying local food also helps local economies. When someone buys a product mass-produced by a global corporation, that person is contributing to corporate profits. When someone buys local food, that person is contributing to the profits of a local producer. This leads to the creation of new jobs and keeps money in the local economy. Food producers use the money spent on their products to buy fertilizer, seeds, animal feed, and other items. These business owners are more likely to buy from other local business owners, stimulating the local economy and benefiting everyone in the community.

Despite the many benefits of local food systems, there are also some concerns about their sustainability. Local growers do not have the marketing power of global food conglomerates. It may be too difficult for these growers to compete with the flashy advertising and prime shelf space of global manufacturers. Energy efficiency is also a concern. Global manufacturers have the funds to purchase energy-efficient equipment. Local growers may not have the money available for upgrades, resulting in wasted energy during food production. Bacterial contamination is one of the major health concerns associated with local food systems. Bacteria cause food poisoning and other serious illnesses. Local growers may not be able to meet the burden of following food hygiene regulations.